What Happened at Rosewood

It began on New Year’s Day 1923, when a white woman in the small sawmill company town of Sumner, Florida claimed that a black man had attacked her. Survivors from the neighboring, mostly black village of Rosewood say she was lying: that her batterer was really her white lover. But by the end of the day vengeful Whites had lynched a Rosewood man they suspected of helping the attacker escape. Local lawmen did not try to stop them.

For the next three days, whites combed the surrounding swamps for the alleged “rapist”. On the last evening, two white men were killed attacking a house in Rosewood. Garbled news-reports and the telephone brought hundreds of armed white men. By the week’s end, they’d burned Rosewood to ashes and scattered its people. At least eight women and men (some say many more) were killed. Over the years, Whites took over their property.

Rosewood’s fate was an open secret for six decades. The public forgot, while terrorized survivors kept quiet and memories faded. It was “rediscovered” in 1982 by investigative reporter Gary Moore, and its story broadcast nationwide on CBS’s 60 Minutes news program. But another decade passed before two survivors filed a claim on the state of Florida. In 1994, State hearings determined that officials had neglected their duty to protect Rosewood’s lives and property. The legislature awarded $2 million dollars to survivors and descendants. Never before had a U.S. government paid compensation in a case of mass racial violence. 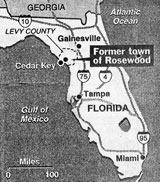 Rosewood Reborn is a tale of violence and heroism by Blacks and Whites both, full of horror and hope, conflicts and still-unresolved contradictions. It’s an American story, combining living history with some of today’s most pressing issues. And it uses the participants’ own voices to tell of a community’s destruction, and the survivors’ ground-breaking struggle for justice.

learn more about Rosewood’s history, the motion picture’s story and the documentary.

Between Civil War and Civil Rights

sign me up
Page load link
Go to Top